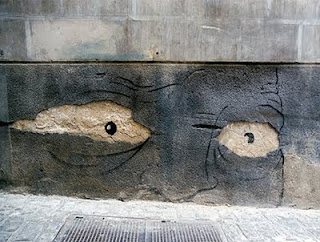 I have never been comfortable with spies; people who secretly obtain information about other people in order to build intrigue against them. It can be childish, as in the case of teenage girls who take sides against one another and tell stories, or serious, as in the case of national espionage where whole societies are at stake. Spies give me the creeps, and this is why, for most of my life I have preferred dogs to cats. Cats seem to me to be spying. They are always watchful and seem to be sizing up what is in front of them, whereas dogs simply respond transparently. The cats I enjoy the most are like dogs.
When I was a child, one day a neighbor came to our house asking my father if he had seen his missing wrench. It was soon discovered that I had taken it from the neighbors shed. I don’t recall taking it. What became seared in my memory was my father, marching me next door to the neighbor, and in a very loud and angry voice, scolding me, much to the neighbors chagrin, for I was only a little boy who had meant no harm. This scolding had an opposite effect on me than my father had hoped. I took all this heated and direct attention into my being, and noticed how my father, who I treasured and wanted more than anything, was completely gripped by me and giving me absolute devotion. My parents had five children in eight years, so absolute one-to-one devotion was scarce to come by. Over the years, I was in trouble many times, and always I could count on complete and total attention from my object of worship—my father.
As I became a young adult, I realized that I had a double nature, both good and bad, and as I stepped out into society, I came to be at war with myself. There was a brief period, when I was nineteen, that during the course of my extensive reading, I read two important books of psychology, by the esteemed psychotherapist, Karen Horney (1885 - 1952): Our Inner Conflicts, and The Neurotic Personality Of Our Time. I understood from her theories, and this is simplification, that neurotic people are essentially at war with themselves, have self-hatred and build defenses against self discovery that causes neurosis. I was aware that possibly I was becoming divided against myself. I then experimented and took the bold step of allowing all of my feelings and thoughts to flow freely without condemnation. I felt frightened, but very alive and whole. This did not last. Eventually, the weight of my “madness” became too much to bear. I became desperate to fit safely in society.
Even after I became religious, I grappled mightily with the dark urges inside of me that seemed to come from nowhere and torment me. I attempted with all my being to shut them away and hope that they would simply disappear. If a dark thought came unexpectedly, I panicked and threw myself to scriptures and light,; to be "saved". The early problem of duality came back with a vengeance. I hated myself. It felt like a war with real espionage, because open communication between my various parts did not exist . . . only dislike. My “saintly” side spied on the darkness, and vice-versa. This went on for years.
So now, decades later, thankfully, I welcome all of myself as vital and necessary. I love mystery and surprise and call my life THE DREAM. Here, material things are not as important as experience and symbol. I live moment to moment without judgment. I do not spy on myself or anyone, but receive one and all as part of THE DREAM that informs my life and is my life. If I find myself with a drunk or robber one minute, and a holy man the next, well, I accept and honor both occasions equally in the moment. What is important is THE DREAM and where it is taking me.
I do not spy on myself but stay in wide-eyed wonder at the universe. If I think people are taking notice of me as “spies”, that is, they are gathering information about me to be opinionated, I simply think positive, close the door to intrigue and condemnation from within myself, and concentrate on the honest gifts each moment of THE DREAM is bringing.
THE DREAM, to me, is a function of consciousness and interpretation of perceptions. I prefer not to interpret and judge my experiences but rather live them entirely as to “know” them. THE DREAM goes before me and I trust it because it is myself, in dialogue with God.
“As far as the laws of mathematics refer to reality, they are not certain; and as far as they are certain, they do not refer to reality.”
Albert Einstein (1879 - 1955)
Posted by Steve at Saturday, November 21, 2009
Email ThisBlogThis!Share to TwitterShare to FacebookShare to Pinterest
Labels: Albert Einstein, Dreams, Karen Horney, perception, Personality, Psychology, spies