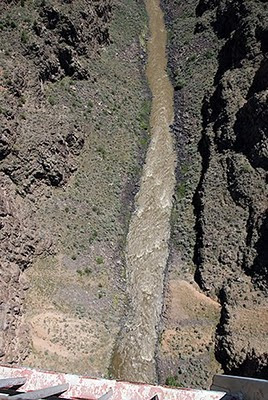 Yesterday I walked with a friend to a place where many suicides have occurred. It is near the rough and tumble old west town of Taos, at the foot of mountains where Taos Indians have lived in their pueblo village for many centuries, and close to where many people have sworn they have heard a mysterious sound called the Taos Hum, featured on the television program called Unsolved Mysteries.

We had to park our car and walk before setting foot on the Rio Grande Gorge Bridge, a fantastic metal span, 650 feet above the river below. Narrow walkways allow pedestrians access on either side of the two lane highway that crosses over the gorge. The day was bright and balmy, but steady strong gusts of wind buffeted us, and almost immediately my friend complained she was dizzy. In fact, it is easy to get vertigo so high in the air above ground, but the view is breathtaking and so spectacular that the draw is almost irresistible. Standing in the middle of the span, visitors can lean against a railing that is chest high, then gaze out and down to the wild, relentless river far below. To stand there in the proud and primitive setting is to be inches away from certain death. I felt something primeval and compelling about looking closely into such a grand abyss—as if in one second I could disappear forever by crossing the thinnest of lines. 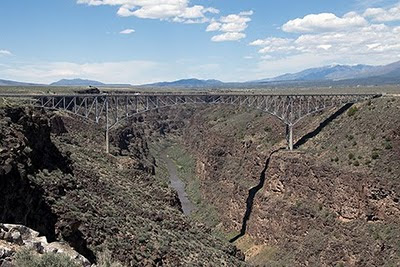 It is said that a ghost inhabits the bridge and has caused people to jump. She appears as a young Hispanic woman wearing jeans and a white T-shirt who is visible one moment, then suddenly disappears. I cannot say that I believe in ghosts like that, but I do say that people carry ghosts inside themselves and that these “demons” can do harm and even drive a person to suicide.

What is true is that invisible vestiges of doubt or fear can be lodged in a human psyche, and whatever a person does to root out this “ghost” can fail, so it lingers as if in a haunted house.

I knew the last person to be confirmed as having committed suicide off the bridge. The last time I saw her was when she modeled for a drawing group on a summer evening, and afterward we talked outside under the moonlight. She seemed very animated and also to be slipping into darkness and then scrambling out again. Her boyfriend had left her; she was plagued with self-doubt and had money problems. Her intelligence was astute enough that she had written, produced, and then performed in many one-woman theatrical productions that had been favorably received, and gained reviews in the local newspaper. In her productions, she tried exorcising her ghosts by making light of her personal problems and how she felt that she did not fit in the world. Shortly after our meeting, I learned that her car had been found by the bridge, and she was missing. About a week later, her body was found, miles down stream, caught in brush and partly submerged in the river. Had the ghost spoken a spell in her ears? For some, the peace of death, and the urge to control the pain of life by a "final solution" ultimately gets the better hand.

After my friend and I peered off the side of the bridge, we walked along the West Rim Trail amidst rugged, wide-open mesas and chiseled steep canyons.  The elevation along the river is 6,100 feet and rises 800 feet at the gorge rim. Along the way we often stopped to gaze from the mesa top above the river at stunning and breathtaking views of the Rio Grande Gorge and Sangre de Cristo Mountains. Not once did I see a ghost. 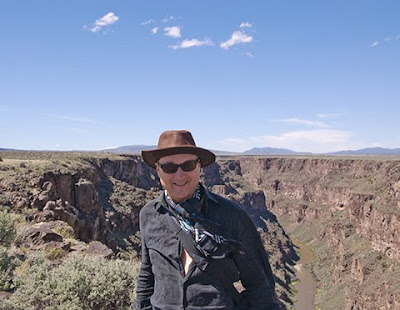