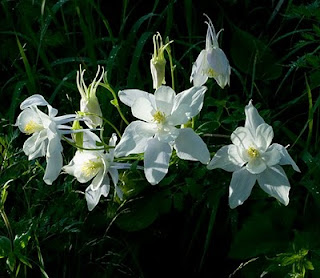 During my marriage, we had a wonderful cat named Misha.  At the time Misha arrived at our house, our other pets were two Australian Shepherds, Sophie and Chaco. When the kitten was set on the floor,  immediately the two dogs charged and I feared it would be torn to bits in a flash. But remarkably, Misha did not know it was a cat, assumed it was among family, and did not flinch before the snarling dogs but purred a hello. This flabbergasted the dogs and they pulled up short of chomping down on the little creature. After that, all was well.
Another episode with a dangerous dog occurred when I was teen and delivering newspapers on my paper route. I had stepped in front of a home and thrown the paper when a German Shepherd suddenly attacked me. He charged, teeth bared and growling. For some reason, my reaction was perfect composure, and when the dog clamped it’s teeth over my arm I was calm and did not flinch. This reaction disarmed the beast and we both stood together, the dog with its mouth fastened over my wrist, while I was waiting to see what it would do next. He let go.
Another time, I was a student in College and during the summer had moved from Baltimore to a rural town called Hagerstown, in Maryland. I had gone there to support the tiny Baha'i community. I went to a realtor to find an apartment. This man owned many properties in town and because I was poor, he took me to a ramshackle house in the most impoverished district. In fact, the house was a former slave home in an area of dark people. He was nervous while unlocking the front door, and I could tell he was anxious for my safety, but also greedy to get the rent. The building was extremely run down and missing floorboards in some places. But I enjoyed the light, and had the whole house for only a trifle rent. The home was not on a street, but rather a back alley. One night, I had been walking alone on a street and had just turned to go up the alley when I was accosted by two youth. They stopped me and asked for some change—a quarter to be exact. I had a quarter in my pocket, but knew I was about to be robbed, so I said “no”. The two wedged me between them and while one repeated his demand, the other pulled a switchblade out of his pocket and clicked open the blade—and it flashed under the streetlight. From my head to my feet I felt a perfect tranquility, and then turned and walked away untouched into the dark alley. Something told me they would not kill me for the quarter, so I did not look back, but walked slowly to my house.
In this world, too often we see each other as adversaries. Muslims are adversaries of Christians, Republicans hate Democrats, rich people disdain poor, English soccer fans hate German soccer fans . . . etc. etc. For humans, these barriers are constructs and to release them can lead to peace and understanding.
Posted by Steve at Sunday, June 27, 2010
Email ThisBlogThis!Share to TwitterShare to FacebookShare to Pinterest