My ritual of writing a blog every week has resulted in 350 posts to date. Once the cadence established itself, remarkably it took on a life of its own, so that the postings have occurred even from the far corners of the planet.

Usually, a story or theme presents itself during the week prior to my Sunday posting, but occasionally, Sunday arrives and I am at a loss to write anything. Fortunately, life is like a kaleidoscope, and with a little twist, fantastic shapes and colors arrive that offer new patterns for viewing.

I once took a poetry workshop from Arthur Sze, a poet laureate of the city of Santa Fe, where I live. It so happened that he collected poignant pictures, clipped from magazines and newspapers, and he used these images to provoke his imagination in new ways. I think that this is the power of images, for it is said, “One picture is worth a thousand words.” 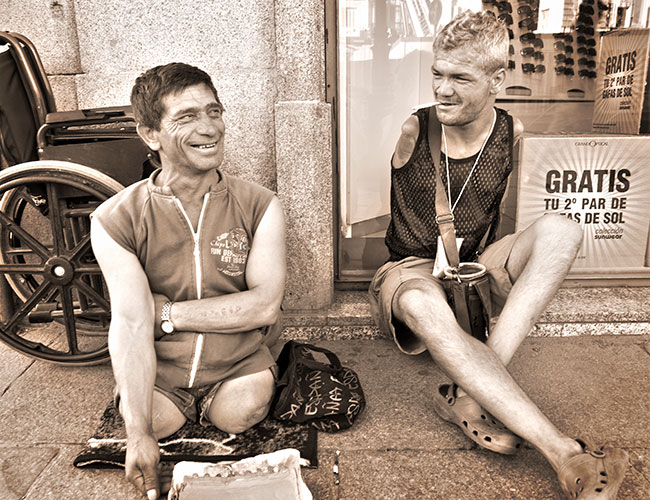 The picture I include today is worth at least a thousand words.

While I was out photographing on the streets of Madrid, Spain, one summer day, I came to a bustling plaza, and as I wandered, I heard the jangling of coins in a cup. A man with no arms stood gripping a canister by his teeth and wagged his head to and fro, shaking coins to make them clink together. This was all he could do . . . his handicap was great. I felt pity, and wondered at his existence in such a state.

Later, I was on a street nearby, walking slowly, when I came upon the same man, seated on a curb, smoking a cigarette. Next to him on the pavement was a man with no legs. I stopped in my tracks in front of them. The man with no legs had lit the cigarette for his friend and put it in his mouth. I motioned to take their picture and they both grinned.