The Worn Tracks Of Common Man

It seems ages ago that I left the United States. I wonder if I have died and entered a dream landscape that has turned generations of pages. First, the land of the Pharoahs and pyramids put a spell on me, and now Morocco with its Kasbahs, and life straddling the old world and modernity. Arab societies are culturally quite different from America—mosques replace churches and the call to prayer wails out from loudspeakers at regular intervals throughout the lands. Most women are covered in dress from head to foot, and in Morocco, often it is the way females play in the ocean at beaches; covered in clothing.

I often as not find I cannot speak with people because of language barriers. In Egypt it is Arabic that is spoken and in Morocco, Arabic and French. Since I speak neither, hand motions and charade is the best understood language.

Mostly, I have not sought to buffer myself with exclusivity but walk the worn tracks of common man. I get lost, and chance sometimes is not in my favor. Perspective and consciousness is everything. I replace frustration with wonder, fear with trust, bewilderment with amazement. Because I do not have barriers of belief or feelings of superiority and privilege, the world is open and I pulsate with life on many levels. Being open to roaming and surprise, I have found myself in places where I was asked into family homes. In Egypt among the earthen homes on back roads, I was made to feel like a brother—part of the family, with a place of honor at the table. Yes, the table was a simple piece of wood with short legs brought out and set on the dirt with a straw mat to sit on, but I felt perfectly comfortable and the food was delicious, and freshly prepared. Animals roamed about, children came and went, and the simple life satisfied my spirit and calmed me. 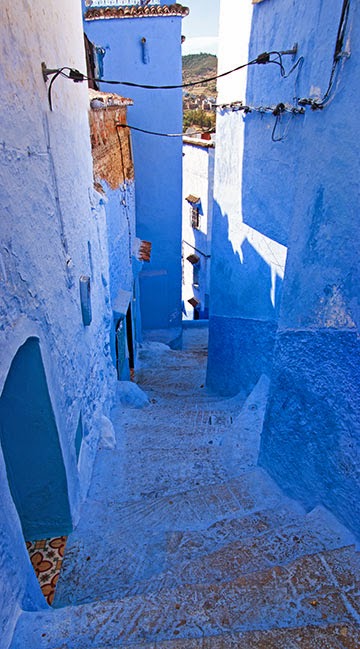 Where but in Morocco could I live in a city of blue? Chefchaouen is such a city. Built on the peaks and hillsides of the Riff Mountains, the moorish architecture is clustered amid narrow passageways that weave throughout the town. The walls and doorways are a traditional blue color. I found myself walking through the village as if in a dream of azure. When I painted, I had fewer colors on my palette—blue predominates.

Now I am in Assilah, along the Atlantic coast and have been here before. I like the relaxed atmosphere and the old medina that is perched along a seawall. It is known for an art festival each summer, and many of the walls are hand painted with artwork. I feel at home.