Indian Meeting Place Of The Universe

A life size wooden Indian faces my gallery every day. He wears a war bonnet, is dressed in buckskin and holds a tomahawk. Each morning he is dragged out of the shop called Shalako that sells old Native American Indian silver jewelry and adornments. Then he goes back inside at closing time. He stands sentinel at the door and tourists from all over the world have stopped to have their picture taken next to him. 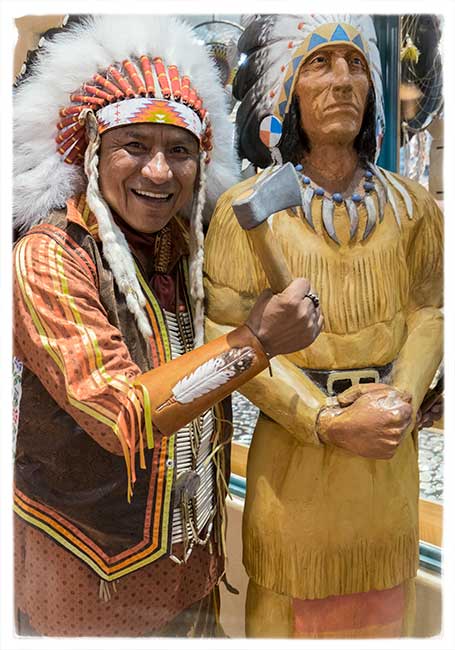 Santa Fe is the meeting place of the universe for Indians this weekend. Indian Market is in progress. Today, a real Indian stood next to the wooden one as I took a picture. He grabbed the ax from the wooden Indian's hand and smiled while I photographed. He is from the Jicarilla Apache Nation in New Mexico, and is here among tribe people from all over the United States, including Alaska, and also some from Canada.

Tents line every street going out from the plaza. The Indians sell their pottery, jewelry, weavings, artwork and more. Tourists come from all over. They can be seen waiting at the booth of a favorite artist for over an hour before opening time at 8 AM on Saturday morning.
Throughout the two days, there are continual performances of native music with colorful dancing in traditional costume . . . and a spirit of happiness and excitement pervades everywhere. 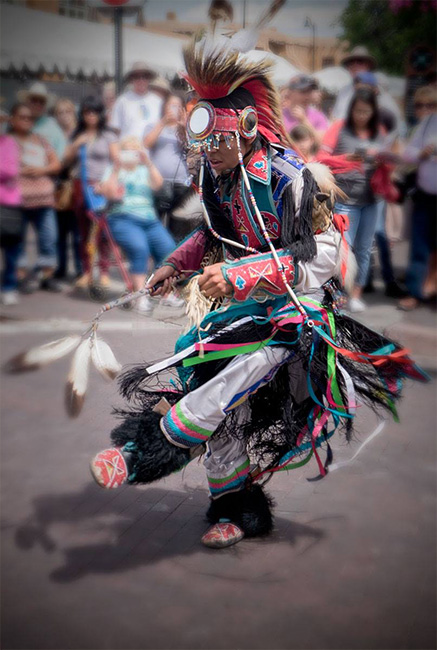 My gallery is only 100 feet from the plaza. Often, downtown businesses complain that shoppers are so fixated on the Indian crafts that their businesses go into a sales slump. Last year I had the good fortune to sell a big painting during the market.

I show up with a positive attitude and am thankful for what fate brings . . . and this year some collectors came in and bought art from me; including a portrait that I had just completed. You might call it a “native” portrait. It is of an indigenous woman from South America, wearing her native costume, including a bright red felt hat.