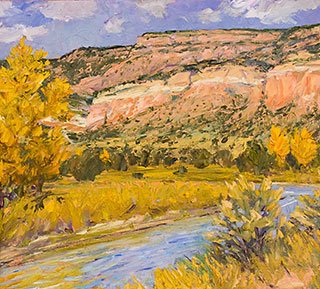 What a day! I woke up with the familiar feelings I have had upon waking for weeks: an aching heart, a confused sense of my purpose and destiny, as well as chronic pain in my shoulders. (A month ago my wife of 21 years told me she wanted a separation, so I moved out of the home we built together and now live alone.) Forcing myself out of bed, I went to the toilet and got dressed in some old clothes to go out painting as I planned. My first stop was a local restaurant for coffee, eggs, fried potatoes, and sausage while I read the newspaper. The drive out of town took about an hour. I drove the entire distance in silence, thinking about my relationships, pondering my dilemmas, contemplating who I am and what I might do with my life. Pulling off the highway onto a dirt road, the next nine miles wound around and over rolling hills, sometimes along a river and often with stunning 360° views of the broad plains, mountain ranges and cliff faces. I stopped frequently to get out and take pictures.
It is always a challenge getting just the right spot to paint. I settled at an area down a tiny rutted road that ended by the river in a grove of scrub oak. The view looked up the river, past golden autumn fields and tree dotted hills to a rocky mountain range in the not so far distance. Not a cloud in the sky, and the air warm. No soul anywhere to be seen, just as I wanted—only the sound of the river, soft breezes rustling the leaves, and an occasional bird warble. The sun felt hot, so I put on a safari hat and changed into a light shirt, then began setting up my easel, canvas and paints. Suddenly, as I turned from getting something out of the back of my van, a man on a bicycle appeared and pulled up in front of me, grinning from ear to ear. “Steve!” he said, looking straight into my eyes.
My God, it’s Joseph, an artist friend of mine from Santa Fe. He had seen my van drive by the place he was camping out. After exchanging incredulous exclamations at the serendipitous happenstance of meeting in the wilderness amidst such incredible solitude and beauty, we promised to see each other later, after I had finished painting.
Although I had brought my I-Pod to listen to music while I painted, once I began putting the colors down in silence, a rhythm established that just flowed along and before long, three hours had passed and I was finished. These days, silence suits me. Washing paint off my hands in the cool river, I paused, thanking God for allowing me to consciously experience His beautiful world.
On the way out, I found Joseph and we shared our paintings with each other. By the time I got home it was 5:30, but I had enough energy to hurriedly get things in the house and set off to the Friday afternoon art openings at local galleries. The air was still balmy and light. As usual, I bumped into friends and fellow artists. My gallery, Adieb Khadoure Fine Art was hosting an opening for the magical-symbolist, and abstract artist, Robert Anderson, who came from his home in Phoenix. Hanging out with crowds of art lovers and collectors is entertaining, especially as I am an artist and, soon people were talking with me about my paintings hanging on the walls. Something funny happened that Robert, his wife and I had a good laugh about. As I was passing through the room where my paintings are exhibited, a lady was staring at a self-portrait I had made, and commenting under her breath to her friend in a somewhat mock horrific tone that the face looked like someone she had seen in the paper recently. “You know that guy . . .”, but before she finished, I looked at her and asked, “Who?” She stammered, wondering who I was and maybe surprised that I looked like the portrait. She would not finish, but I guessed that she was referring to one of the common criminals who appear regularly in print for some horrible thing they have done. Anyway, later, as we stood looking at the rather serious portrait I had painted, I joked that I could have painted myself holding a placard across my chest with jail-cell numerals emblazoned on it. Laughing felt good—especially laughing at how serious I can be about myself.
See more of my artwork on my website
Posted by Steve at Saturday, October 07, 2006
Email ThisBlogThis!Share to TwitterShare to FacebookShare to Pinterest