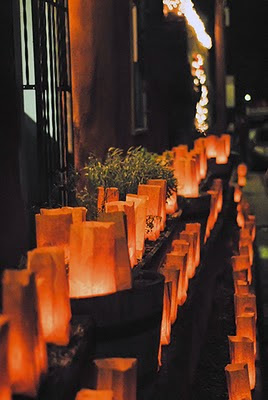 Oh, for sweet light! People around the world rejoice in and praise it. Light represents hope, sustenance, and illumination.

Into my heart's night
Along a narrow way
I groped; and lo! the light,
An infinite land of day.  ~Rumi

In Santa Fe, New Mexico, USA, where I live, there is an annual tradition of giving light on Christmas Eve. Paper bags are weighted with a layer of sand and a candle is lit and placed inside, then, scores of these “farolitos” (Spanish for “little lights”) are placed along paths, streets, sidewalks, on walls and even rooftops. Streets are closed to vehicles in an old and historic part of town along Canyon Road, where the art galleries line both sides of the avenue. As night falls, people gather in masses to walk among the farolitos, or gather at luminarios (bonfires) to sing carols and be festive. The tradition lights up the heart and soul, as thousands of people stroll. Amid joyous sounds of Christmas music, the revelry of friends and families greeting each other fills the air.

The lights have their roots in the 1800's. Small bonfires were used to guide people to Christmas Mass. Quite often they were set out during the final night of Las Posadas, the symbolic representation of Mary and Joseph seeking shelter in Bethlehem walking from home to home before Jesus was born. 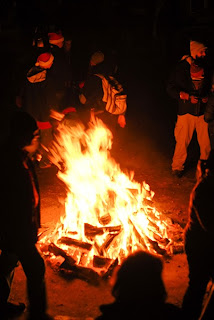 This year as I walked among the darkened masses of people and flickering firelights, Heidi of the Mountains walked by my side. “This is my first time!” she exclaimed with glee.

No matter how fast light travels it finds the darkness has always got there first, and is waiting for it.  ~Terry Pratchett

Your life is something opaque, not transparent, as long as you look at it in an ordinary human way.  But if you hold it up against the light of God's goodness, it shines and turns transparent, radiant and bright.  And then you ask yourself in amazement:  Is this really my own life I see before me?  ~Albert Schweitzer

A couple years ago, during October, I arrived in Varanasi, India, just at the beginning of Devali, "festival of lights"; an important five-day festival in Hinduism, Jainism, and Sikhism. Mounds of marigold blossoms were heaped in the streets, to be gathered to make garlands. In the evening, a man rowed me on the Ganges River to see fireworks and watch the huge cremation fires on the riverbank. As night fell, little handmade boats were floating everywhere—set upon their voyage carrying flower petals and candle, lit with someone’s hope. 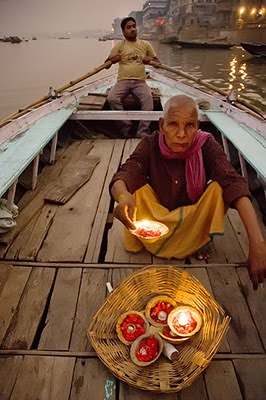 My mind withdrew its thoughts from experience, extracting itself from the contradictory throng of sensuous images, that it might find out what that light was wherein it was bathed... And thus, with the flash of one hurried glance, it attained to the vision of That Which Is.
Saint Augustine

After I left India, by chance I arrived in Chiang Mai, Thailand, at the beginning of Loi Krothon, a festival where firelight plays a central role. "Loi" means "to float" and a "krathong" is traditionally made from a section of banana tree trunk. A krathong will be decorated with elaborately folded banana leaves, flowers, candles and incense sticks. A low value coin is sometimes included as an offering to the river spirits. 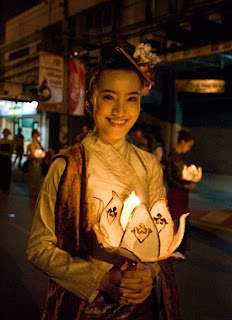 During the night of the full moon, Thais will float their krathong on a river, canal or a pond lake. The festival is believed to originate in an ancient practice of paying respect to the spirit of the waters. In Chiang Mai, night parades wind through the streets, with many of the costumed participants marching with candles aglow. Also, candles are lit under canopies of paper and as the warm air rises and is trapped, the lit paper bags rise into the air—thousands through the night, glowing all the way. It is quite the sight. 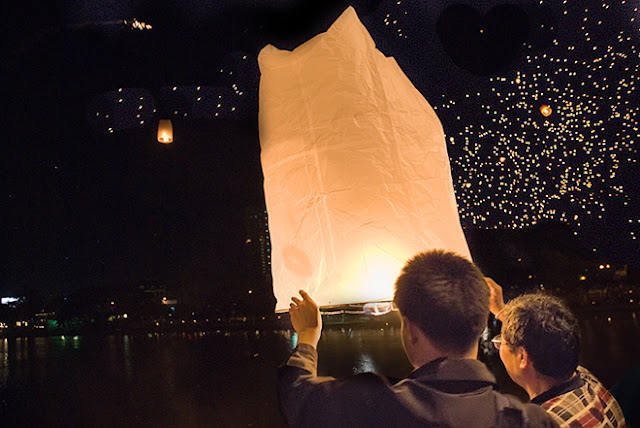 And of all illumination which human reason can give, none is comparable to the discovery of what we are, our nature, our obligations, what happiness we are capable of, and what are the means of attaining it.
Adam Weishaupt

There is not enough darkness in the entire world to put out the light of even one small candle.  Robert Alden
Posted by Steve at Saturday, December 25, 2010
Email ThisBlogThis!Share to TwitterShare to FacebookShare to Pinterest
Labels: Asian Christmas, Chiang Mai, Devali, Ilumination, Inspiration, Light, Loi Krathong, Santa Fe Christmas, Varanasi