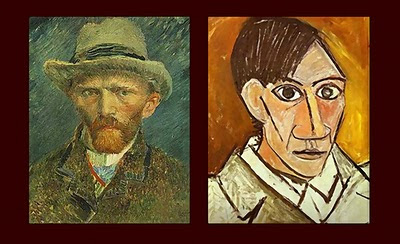 Being an artist is like being a tightrope walker, trying to keep balanced between creativity and staying in public favor. To lose either is to fall, but losing creativity is death, whereas public favor is capricious, not essential for life. Most artists depend upon public sanction and approval in order to provide for themselves and family. Everyone knows the tragic story of Vincent van Gogh (30 March 1853 – 29 July 1890). He passionately gave his talents to the world, but the public did not receive his gifts. Thus he was impoverished and depended upon the charity of his brother to survive. At the tender age of 37, he killed himself, and then some years later when public taste shifted, his work gained favor. Now, van Gogh is an icon and his work is among the most sought after in the world. And what if he had acknowledged and followed advice? We all would be poorer if he had conformed to the taste required by society and painted academic paintings with subdued tones and little flair or personality. Then, his unique and wondrous gift of authenticity would have been diminished and blighted and his greatest work would not have been achieved.

In contrast, Pablo Picasso (25 October 1881 – 8 April 1973) set the world on fire and after a brief initial struggle getting established, had the public eating out of his hand. Much of his work could not be understood, but perhaps because society was hungry for change and he was the man of the hour and capable of fantastic feats of creativity, his bold advances were met enthusiastically and he became very rich. His art is also among the most sought after in the world.

Common advice for an artist is to create a niche and be identified much as commercial brands are recognized. Then, grow the brand.  Most artists do this.  Norman Rockwell, Andrew Wyeth, or even Jackson Pollock, are painters who settled upon a technique and then harvested results. This practice extends to other art forms, such as poetry and writing, where some are haiku writers or fiction novelists, but not both. Very few are like Leonardo daVinci, a painter, inventor, sculptor, poet and scientist.

I admit that the public sometimes factors into my thoughts when I am in my studio. I have had success as a landscape painter, but other work has met with less enthusiasm. Some of my paintings, like the Hangup series, (faces hanging from clothespins on a line), have met with delight and wonder, but also revulsion and hatred. When I made the first, I was responding to a quirky inner vision, not public taste. I had decided to follow through with an odd momentary vision, and eventually produced thirty-five paintings. At one point I stopped painting, since I felt I was coming unglued, but now count the Hangup paintings as among my most important work. To prove the point, one of them, Van Gogh, All Hung Up is part of the permanent collection of the Foundation Vincent Van Gogh, in Arles, France, among paintings by luminaries of contemporary art. 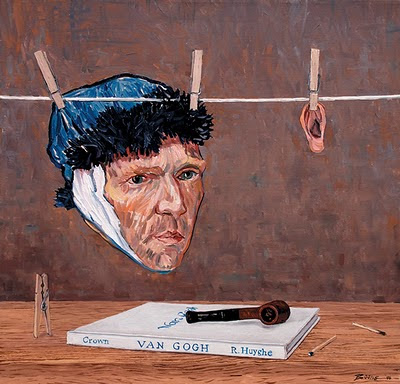