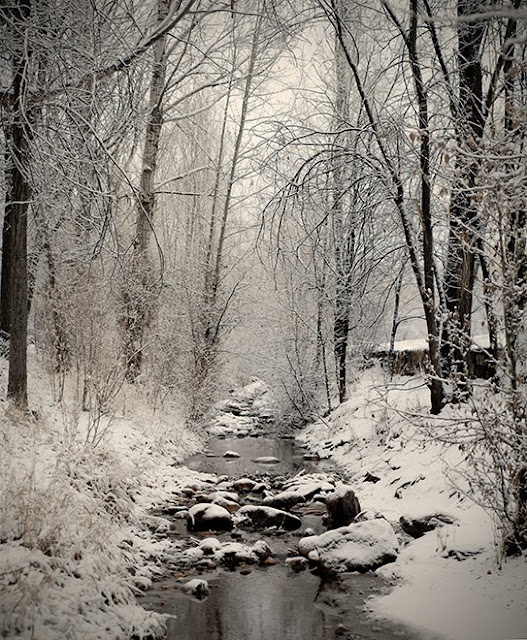 "Is not life a hundred times too short for us to bore ourselves?" Friedrich Nietzsche

I live on a hillside in a home nestled among a cluster of dwellings. When Santa Fe had it’s big snowstorm last week, my vehicle was buried in snow and ice, so I decided to just wait until conditions improved before trying to drive. But I am not the type who can stay at home for long. While the snow came down one afternoon, I went for a walk and took my camera. Everything was a blur of white, and I had to be careful not to fall on the steep terrain. In the silence I walked, carefully choosing my steps. Soon, the poetry of nature was casting a spell and I became entranced by familiar surroundings that had drastically changed their countenance. Colors were subdued to tones of white, broken by objects not completely concealed in snow. Soon, I was covered with snow as well. I made my way to the small creek at the foot of the hill and though my feet were cold and fingers inside my gloves were chilled, I plunged down the snowy embankment to explore. I have written previously about this area, and you can read how only recently, it was ablaze in fall color: Stopped In My Tracks.  Now, whiteness prevailed. The beauty took me by storm, and I walked, stopping to take pictures.

There are times for artists during creative moments when an inner contentment is reached. Their passion is heightened and happiness is found—so that nothing else matters except being in the “zone”. Think of Michelangelo, working on his back for hours high upon scaffolding in the Sistine Chapel. Sometimes paint would drip in his face and his body ached, but he was ecstatic, oblivious to the outside. When he reached home, bone tired, the spell was still upon him and he slept in his clothes with his shoes on, only to go back again the next day.

How often the siren song of the creative muse drowns out everything else . . . so that time vanishes and hours fly away in moments. I have missed appointments because of being in the zone.

During the snowstorm, as I became more excited by the magical aspects of my surroundings, I entered the magical territory. Nothing else mattered . . . the cold or even the oddness of stepping in the creek while taking pictures. My muse stood by my side and I was happy as a lover with his beloved.

“Reverie is not a mind vacuum. It is rather the gift of an hour which knows the plenitude of the soul.”   Gaston Bachelard
Posted by Steve at Sunday, January 02, 2011
Email ThisBlogThis!Share to TwitterShare to FacebookShare to Pinterest