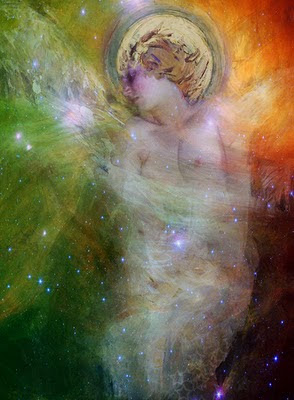 What we know with our mind is but a drop in the ocean, for vast realms exist outside our experience. We struggle to understand ourselves, and nature, and make feeble efforts to go further into the universe, but alas, the finite mind cannot comprehend the infinite. We live within vast mystery. One of our biggest puzzles is the world of Spirit. Since birth, we have come to understanding through physical imprints. For instance, we learn numbers by counting objects, and we learn speech by associating sounds with actions and things that can be seen or touched. We learn the laws of nature by falling, or burning our fingers, and experiencing the revolving days and nights. Yet, the Spirit world exists beyond the confines of the physical realm, and for this our understanding is limited—which leads to speculation, and arguments of faith. I, for one, believe there are infinite worlds and that just as there are elemental kingdoms, so too, there are Spiritual Kingdoms that are even vaster since they are not bound by time and space.

Many years ago I had a dream: I stood alone at night on a grassy knoll and gazed up at the starry sky. A little cluster of bright lights caught my eye and I recognized the Pleiades, also known as the “seven sisters” in the constellation Taurus, (my sign). I pondered the light reaching my eyes and realized the immense space between me and the stars. Light from stars can take billions of years to reach us. I thought, “How could God be in me and at the same moment be so far away in the farthest reaches of the universe?” I was confused that He could be so intimately in my life and intimately in life throughout the cosmos, even billions of light years away. No sooner had I had the thought when a voice spoke from behind my shoulder, “He is closer to you than your own life vein!” At that instant, space collapsed to nothing and I realized the oneness of The Creator.

The Spirit world permeates all of our physical existence and furthermore, informs and comprehends everything. If we watch closely, we can be in touch with angels. This requires that we get outside the confines of rigid thinking. Then, we can see signs from Spirit in dreaming, through nature, especially plants and animals, and even in numbers.

After my beloved daughter Naomi died, signs appeared that lifted me from grief. I will just relate a few: A peach tree we planted on our property was always but a stick, with a paltry plumage of leaves and no fruit. A nearby peach tree did fine, but not this one. After Naomi died, almost like a miracle, this thin, withered tree made  a basketful of delicious peaches. This happened one year only—immediately after Naomi had gone into the Spirit world. I took this as a sign that she had gone into a place of abundance and fruitfulness, and was giving us confirmation through the plant kingdom that all was well and not to be sad, but rather, glad. Another time, on the first anniversary of her passing, a group of us gathered in my back yard to pray and remember her great and gentle spirit. We all had written prayer wishes and wrapped them into small pouches, then tied them to a long cord. Standing in a circle, holding the cord between us, we each spoke from our hearts, remembering Naomi. A gentle mist fell, and suddenly a rainbow appeared. When the last words were spoken we stood silently, when out of the blue, two doves appeared directly above our circle and began an incredible dance that astonished and mesmerized us. The birds plunged down in a tight spiral, their wings almost touching, then paused and spiraled upward only to plunge in a spiral down again. Then they disappeared as quickly as they had arrived. It was a once in a lifetime sight. We were all breathless, and not word was spoken until a woman shouted, “Thank you Naomi!” And a child chimed in, “I hope she keeps sending us messages like that, showing us that everything is okay!”

I have further observations about how Spirit world speaks to us in numbers, but I will save that for another time.

To read more about Naomi, see: A Heart Traced In Sand
Posted by Steve at Saturday, January 29, 2011
Email ThisBlogThis!Share to TwitterShare to FacebookShare to Pinterest
Labels: Angels, Metaphysics, Space and Time, spirit, spirituality

Thank you for sharing this beautiful story. I was also given a sign of our connection to spirit. Shortly after a friend passed on I had a dream that he was sitting at a table with many others and there was an abundance of food. I stood near him and he reached out and touched me. I was so astonished! It felt so real. I said, "You touched me." He said, "Of course we touch each other." This was one of the most vivid dreams I've ever had.

Yes Mary-Lela, there is abundance in the next world . . . the table is set and waiting for us. Imagine having no need and being continually wrapped in love. How much compassion those beings must have for us who struggle here on earth.

Yes, there is the unknown and the unknowable beyond what I can count or pronounce. Not sure about the notion that it is automatically better, safer or more plentiful. Tempting vision though.

The challenge is not to be distracted by what is unknowable and committ ourselves to this tangible, knowable life and find a productive place in it. Because THAT is what we seek most it is what we also imagine the afterlife to be.

Committ to this! Get lost in this life rather than ruminate about some other. You can't live next week (next life) this week.

Tom: Just as this world in not flat as was once supposed, neither is it one dimensional. Rather, many dimensions exist simultaneously. Most of the greatest human achievers had one foot in this world and the other in an invisible realm that inspired them. Here are a couple quotes from Einstein: "Reality is merely an illusion, albeit a very persistent one." "I want to know God's thoughts; the rest are details." Thanks for your input!