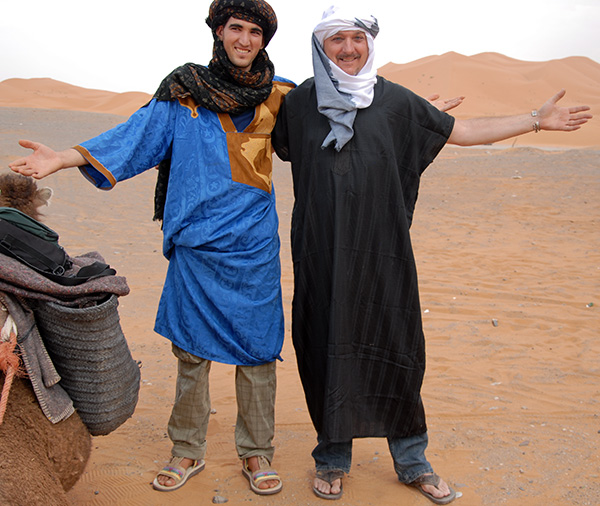 Children love playing in sand, whether it is on the banks of a river, on a beach, in a sand box, or simply heaped in a pile at a construction site. I spent many hours as a child playing with my friends in sand, creating tunnels, and castles with moats. Now I am at Erg Chebbi, a very big pile of sand at Merzouga, Morocco, in the Sahara desert. 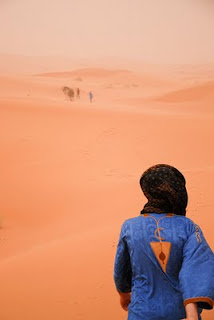 When I met Said, (pronounced Sah-eeed), my young Berber guide who was waiting for me with a camel, we smiled at each other and clasped hands. He has the fair skin of many Berber people, and slightly rosy cheeks, and was dressed in a flowing royal blue caftan and a black scarf wrapped around his head. In a minute, Said helped me onto the camel and we began trekking into the red ochre colored sand dunes. He led the beast with a tether that was attached to a ring in one nostril. I wore a black caftan over blue jeans, and a white scarf wrapped around my head. My eyes were highlighted with black pigment, using a traditional technique that keeps off the sun’s reflections. Many men do this, and I find it helps ward off harsh sunlight. It stings when it goes on, but lasts for days.

A short distance and we were ambling across the dunes past the carcass of a dead camel. I took a picture as Said gazed behind us at the clouds in the sky and then said, “The wind is coming.” A short while later, gusts began kicking the sand up all around us. We met up with another Berber leading a man and woman on camels. Said asked me if we could walk in a “caravan.” All the camels were tied single file and the two Berber friends walked in front, chatting amiably.

I had been snapping pictures but now the wind had intensified and I was concerned that my camera would get sand blasted like everything else. I imagined the old movies where a sand storm in the desert stops everything and travelers hunker down behind their resting camels, hoping not to be buried alive. I wanted to gaze at the scenery but could only look away from the direction of the wind that was throwing sand at me. We continued trekking onward until we found a tent site. The couple stopped first, and to get more privacy, we continued further to a camp at the base of gigantic dune and an old, weather-beaten, toothless man greeted us with laughter and a smile. The three of us were the only ones there.

The tents are small, just bamboo sticks covered with burlap. Inside is only enough room to sit and sleep, but not stand. When the fabric wears away, another is thrown over it. The wind comes through and sand gets in everywhere. Said, the old man, and I sat in the dark hovel, and Said made dinner over a burner. We joked, and talked about my travels and how long it would take to get by camel to Timbuktu—about sixty days. After dinner the wind had calmed and the old man went outside to lie in the sand under the full moon, while Said and I went to a vacant tent and played Berber drums. He sang as he played and I carried a beat alongside. He sang in Berber and Arabic, with a little broken English thrown in. When I heard, “If your happy and you know it”, I sang along and helped him learn the song (song link here). The refrain changes to anything you want, like, “if your happy and you know it clap your hands . . . if your happy and you know it laugh out loud” etc. We banged the drums, sang and laughed until we were worn out. 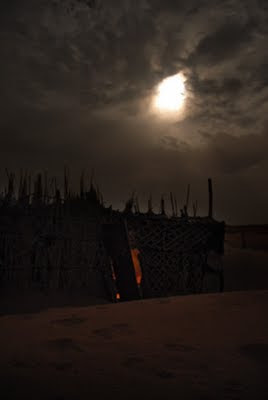 I chose to sleep outside, under the stars. The full moon kept me up, and because sound travels farther and easier in the desert night, other drumming from camps reached my ears. When the wind picked up and I felt a drop of rain, I went into the tent and brushed sand away from the sleeping rolls, got as comfortable as possible and fell asleep.

Before dawn, Said called into the tent “Hey American, wake up.” To my dismay, it was windy again, and a light rain fell. I dressed and went out. Said had disappeared and I began walking over the dunes, determined to take pictures anyway, with little hope for a classic sunrise shot. In a short while, the camp was out of sight, and I was wet and chilled from the wind. My eyes stung from sand, so I made my way back to the tent where Said had breakfast ready.

On the trek back, the sand was firm from the rain, and within an hour the sun was trying to come out as I cast off the wool blanket. I dismounted and ran alongside the camel and Said, taking pictures. We joked that the camel was the famous movie star, Omar Shariff and as we trudged onward, sang, “If your happy and you know it.” We joked about the Libyan dictator Muammar Gaddafi and his famous “Zenga, Zenga!” statement, and added that to the song; If your happy and you know it say, Zenga Zenga! 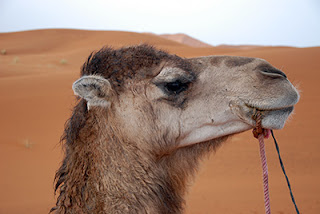 When we arrived back to our starting place we were like brothers and promised to stay in touch, and be friends on Facebook. 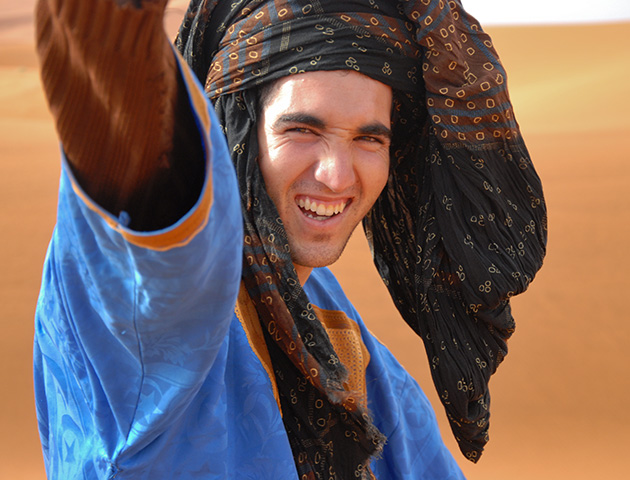 A simply woderful story about your expiences on the Merzouga Dunes.

What a great experience!

P.S.We must share some Maroc stories when you return.

Yes Paul . . . I want to share Maroc stories and pictures with you when I get back to the USA.