Fluid In THE DREAM 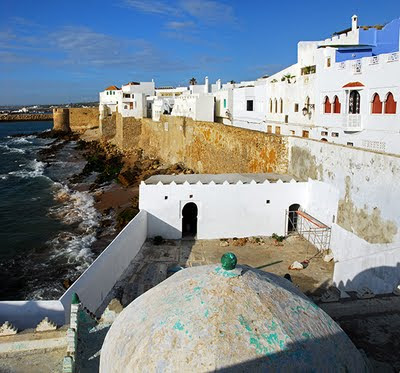 THE DREAM has a life of it’s own. I may have plans but if I am fluid in THE DREAM, sudden shifts occur and I must go along. I had planned to leave Merzouga and drive north to Chefchaouen, a town famous for it’s mountain setting and dwellings painted blue. As I was preparing to leave town I talked with my friend Ali and told him that with my remaining week, I also wanted to visit ocean beaches and arrive at Casablanca to depart Morocco. He suggested that I could go to Asilah on the coast, where the buildings are decorated in blue. This is how THE DREAM took me to Asilah.

The drive took a full day and one night. When I arrived at last, I actually drove past the town and when I turned around, the place looked rather non-descript. I inquired at a couple hotels, but they cost 400 Moroccan dirham, more than I wanted to pay and I was not satisfied. As I drove slowly in the streets near the ocean, I spoke a prayer to Naomi who I had been feeling near me, and it was as if someone else took hold of the steering wheel and pulled the car up in front of Hotel Zelis. The front desk manager showed me a spotless room with a balcony overlooking the Atlantic and told me the price was 300 dirham and included breakfast. Furthermore, the room number was 308, which immediately confirmed the whole deal. (See my blog about eleven’s).

Asilah has a sweet medina that gives the town its character. Each day I went there often, passing through one of the Báb’s (Báb means gate) in the walled area, to browse and photograph the whitewashed and brightly colored walls that were sometimes painted with artwork left over from an annual art festival.

THE DREAM delivered me to several characters, including Adnan, who worked in a small art gallery and was fluent in English and traded philosophies with me, especially about Islam and cultural differences between the occident and Arab countries. He said freedom is illusion and simply to have his religion is enough to be free. I took issue with Arab countries lack of tolerance for other beliefs and he said yes, but other beliefs might influence the young people away from Islam.

I also met street musicians, and Abdul, an itinerate naïve artist who pounced on tourists in the Medina, and spoke passable English. And the last evening, as I sat at a table at a sidewalk café, Hassan, a thin young man dressed in a red t-shirt and jeans approached to sell me coral necklaces he had made. I did not want to buy his necklace, but offered to buy him something to eat. He sat down and ordered a coffee. He spoke good English and said he had trained to be a chef, but could not find work. Our conversation turned philosophical and we talked about speaking good words to people and he said it is taught in the Koran. Abdul wandered by and I gave him a piece of my pizza and he said, “next time I will be the one sitting with you.” Some children came to beg for my pizza and I gave them some. At the end of dinner, Hassan again asked me to buy something and explained he lived with his parents, took care of some siblings, and also had a bad toothache but did not have enough money for the dentist. I have been hassled so often to buy things in Morocco, so I asked him how much he needed for the dentist. He said 45 dirham, and I offered to give it to him. But I only had a 100 dirham note. He told me to give it to him and we will go get change. We walked and he began taking me past shops and into alleys. I stayed beside him and continued talking but grew wary. I told him how often I had been approached for money and explained that sure, if I were king I would help everyone. (In fact, I have not sold a painting in two months and have been living on savings.) He said just thinking like this is a blessing, and it is taught in the Koran. We reached a corner and he pointed me which direction to go to my hotel, then pointed in the opposite direction and said he would go now for change, and took off running. After he disappeared, I waited a few minutes, since I had built trust with him, but realized he was not coming back, and I wandered through the dark to my hotel. I felt a little sadness, but no anger. I thought that he must have really needed the money, and he was probably praying for me to make up for my loss. Anyway, this is what THE DREAM had delivered that evening.

Before leaving the hotel in Asilah, I asked about a couple places along the coast and was told to go to Mouley Bousselham, known for its beach and nearby bird sanctuary. I arrived there from the highway and drove toward the ocean, looking for a hotel. The commercial district was only a couple of shops, and the hotel I looked at was claustrophobic and grimy. I got back in the car and drove slowly into a neighborhood on a bluff along the coast. I felt a reverie and again as if someone else was driving the car, pulled over. I went into a tiny convenience shop in the middle of the block of residences. The old man did not speak English, but I managed to make him understand “hotel”. He took me by the hand and went next door, calling out to someone inside. A young man named Abdul arrived who spoke English and said I could stay there. He showed me a clean, comfortable room and said breakfast was included. I noticed that the home had a placard on the wall out front that said Casa Nora. The rate was 300 dirham, and I could pay more for dinner. If there were a number on my bedroom door it would be 11. 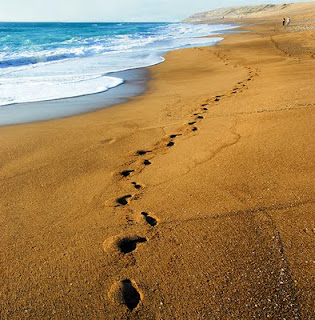 The house looks out over the ocean where I swim everyday. The dinner preparation and service is far more than I expected. (See my pictures on Facebook.) I have become friends with the owner, Mohammed, who speaks English and has taken me to the wildlife refuge lake to show another house that is being finished into a guest lodge for the many bird watchers who come during the year. The trip over a bumpy road was worth it just to see the craftsmen, who were painstakingly putting intricate patterns of tiles together throughout the home. When it is finished, he wants me to return and stay to paint my art. He confided that he has always wanted a bedroom full of art depicting belly dancers. I told him I may be back, but I am not sure because I am like the wind and do not know where it will blow across the world next. On the way home he took me to a bustling fish market. 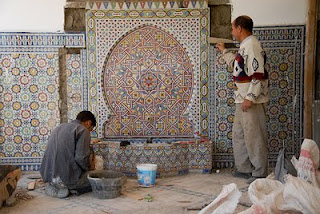 In two days I depart Morocco and arrive in Barcelona, Spain for a few days before returning to the USA. I have some wonderful photos to work with, and a boatload of adventures to write about.
Posted by Steve at Sunday, May 22, 2011
Email ThisBlogThis!Share to TwitterShare to FacebookShare to Pinterest
Labels: Asilah, Morocco, Mouley Bousselham, The Dream, travel blog