While still in Paris, the night before leaving, a dreamy transport came over me and a rhapsodic tingling flowed from my feet to my head—and I knew. The certainty came as a surprise because a bomb had recently blasted through the medina in Marrakech, killing tourists. So my spiritual confirmation that I would love Morocco came as relief beforehand.

Heidi of the Mountains and I arrived to the airport in Marrakech, rented our car and set off to find our riad, (hotel in a former home). I am a more experienced traveler and have been to several African countries, including Egypt (see Steven Boone Photos from Around The World), so the dusty, crowded and derelict streets did not startle me, but for my companion, having just come from sophisticated Paris, the scenery was a surprise for her eyes and maybe a bit of a shock. Before long, as we looked about for Riad Nesma, trying to discern where our riad might be, a man on a motorcycle sped up along side our car and speaking in English, asked if we needed help. He directed us to a car park and from there helped us to hire a fellow with a big wheelbarrow to carry our luggage down a narrow street to our hotel. Once we were situated, Abdel stuck to us like glue, offering to take us places. I asked him how much and he said, “No worry, just pay me what you like, and if you don’t like me, do not pay anything.” This was our introduction to Morocco.

The colors, sights and sounds are fantastic. The souks (markets), in Marrakech are a virtual smorgasbord of brightly colored shoes, textiles, sacks of spices, earthenware, aromatic tinctures and creams, mints and foods, decorated furniture and artwork. Nothing is behind glass, rather it is within touch and ready to be handled. Merchants greet you with a smile and are ready to bargain. They are expert at selling, and even though you get something for half price, later you might regret that you paid too much.
From Marrakech we drove to El Kelaa M’Gouna, a town in “the valley of roses” in the Atlas Mountains. It is an area famous for producing rose water and perfumes. Each year, the first weekend in May, is the Festival of Roses. We have arrived just in time, but the trip from Marrakech took twice as long as I anticipated, especially because of the slow driving along twisting roads over the mountains. Our hotel, called Dar Timitar is owned by two brothers, Ahmed (pronounced Ak-med) and Rachid (Rah-sheed), and sits in a spectacular situation atop a mountain, overlooking the valley and villages below.

Most tourists in Morocco are French, since it is a former colony and French is widely spoken. Ahmed speaks French and Rachid speaks English. They are both hardworking and kind. Rachid becomes our guide for the next three days and we quickly bond as he takes us hiking through fields of roses, over gurgling brooks, among walnut, almond and peach trees, through fields of wheat and barley, and into the Berber villages made of earth. He is a devout Muslim, as are most everyone, and is expert at explaining the Berber culture and traditions. The leisurely walks are wonderful, especially since the roses perfume the air while birds add their songs to the sounds of the water flowing in ditches.

Life is simple and often we see women in the morning and evenings, returning from the fields, bent over, carrying piles of fresh cut alfalfa to feed their animals. Children play, and old men sit by the roadside and daydream. When I meet other men, they tap their heart, shake my hand and say “Salaam”, which means peace is with us.

Today we leave the mountains and begin driving to the sea. Our next stop is the coastal town of Essaouira. 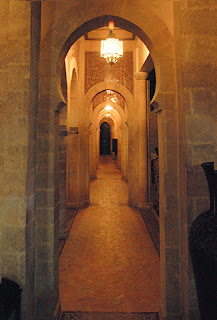 Note: Have arrived in Essaouira after a day of driving. It is a fantastic city on the coast that reminds me of Venice, Italy. Within the walled old town where no cars are allowed, are mazes of narrow walks lined with shops similar to those in Marrakech.  Our room is in Riad Mimouna, built at the ocean edge and the windows open to the west upon the Atlantic sea. 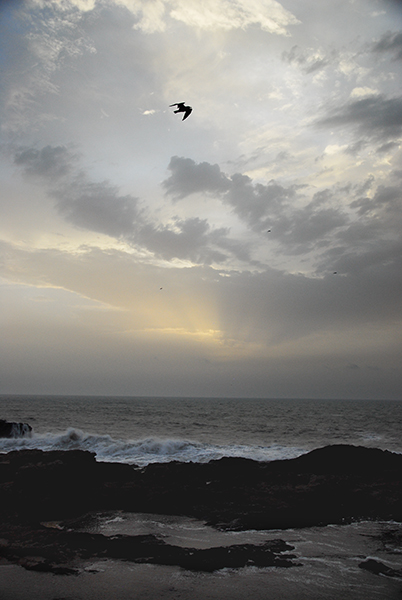 I enjoyed seeing your photos and reading about your Moroccan sojourn.I was last in Maroc in 1990. My first trip was 1975. In 1980 Home Magazine of the Los Angesles Times published an entire issue on Maroc and Tunisia with my pics and text. Can't wait to visit again. Arn't the colors beathtaking and the people great. Enjoy! Enjoy

Paul: Indeed this country is a wonderful African experience. I have three weeks but need a lifetime.